Yep! Reason for the joy! The programme CAF is successful furthermore! In the present school year 2016/2017 we have got up to now only positive feedbacks. Indeed, two of the 45 children have left the school prematurely because the families have moved the house. But they can visit elsewhere further the school and do not depend any more on the help from ibbo. Other 43 children learn diligently and use her chance which they have got as a gift by your donations. Let us create to wide future! It is worthwhile!

Last year was very active. Last year, after the earthquake the reconstruction project Bashupati HSS in the village Ramjathanti begun. It is sped up. In April visited Andi Rütsche the school and could talk with the responsible. Unfortunately, the costs have risen after the earthquake and the import stop by the Indians. Thanks to a donation by the catholic administration of St.Gallen it could lead the way in cooperation with a Dutch charity organisation. At the same time we began a project in Modikua, a small village at the mountain side of the Gandhaki valley. In the central school a library is furnished. Besides, a big support in the fundraising was Sandro Bührer. Within the scope of his school-leaving exam work he collected on the platform 100-Days some thousand swiss francs for the library whose financing is protected now. We thank him on this way quite warmly for his engagement. The construction and rebuilding, as well as the acquisition of books has already begun, in the meantime. To reduce the migration from the land it needs strong, well equipped schools. This is also valid for a small suburb of Pokhara. Bhalam is on the other side of the big gulch and is connected with Pokhara by an imposing suspension bridge. In this small accommodation the school with a thought-out example fights for the survival. Part of the strategy is a well functioning kindergarden. This could be realised in 2015 and was visited also in april. Reports and pictures of our projects and the visits are found, as usual, on our homepage, so that the donators can follow the progress of the works.

Last year Raphael Büsser published our homepage also in english.
The interest of the Nepalesen in our work can now be better served.

The participation in the social forum and environmental forum belonged to our public relations. On the Begegnungstag (interculturel festival) we were also present with an information stand to inform the visitors about our projects. However, the interest there kept to a certain extent. For it we had in the Christmas fairs in St. Gallen and Arbon active company.

An important source of income is the Texaid for us. During the collection of the old clothes some aides supported us – we give them here a thanks.

ibbos charity shop DREAMCATCHER, since the beginning of 2015 open, is resumed by Felix and Brigitte.

This year the libraryproject on the Matedewal HSS in Moduka can be realised. We will inform all spenders on the internetplatform 100days about the project after finishing the work there.

The work on the bigger earthquakeproject in Ramjathanti depends on the weathercondition and the availability of resurces. We will see how far we can get there.

Also we will creat in two schools some new kindergardens. It is important to us to integrate a lot of childern in school as soon as possible.

Our child aid found CAF is very activ too and support at the moment 45 children. Therefore a lot of children are able to go to school. Furthermore we are thinking about to extend the CAF to Freetown (Sierra Leone).

Our other project in Madagaskar (Ampasina) will be finished this year. Klaus Horn accompanied and supported the project there.

In St.Gallen we will be present at the „Umwelt- und Sozialforum“ (environmental- and social forum) and the „Begegnungstage“ (meetdays) with some workshops and an information stand.

During Christmas we will sell a lot of things from the shop on the Christmas fair.

This year it is very important for us to find some new members and donaters. Unfortunatly the costs for our programms radically increased last year. Therefore we have to watch every penny. The association of donators should raise.

Also are we looking for some support for the Texaid-collection in may the 20th. Primarily we need some vehicles to transport all the stuff. In the last years we had to rent some cars which reduced our profit considerably.

Last but not least something new will happen this year. Ibbo is organising a journey in october to Nepal. Andi Rütsche will show us as a tour guide all the things to know about Nepal and of course it is possible to visit some of the ibbo projects. Flyers for the journey are avaible on our homepage, on facebook and of course in our shop.

We are looking forward to a new succesful and interesting year with a lot of new contacts.

November 2016
The ibbo website is now also available in English. Further news can be found on the German website of ibbo. 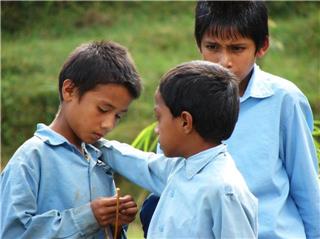 Vision
Nepalese are able to actively shape their future and impinge upon the social and economical future of their country. Due to enhanced education, the Nepalese people will have easier access to information and are able to take actively part in political life.

I want to donate