The southern lowland plains or Terai bordering India are part of the northern rim of the Indo-Gangetic plains. They were formed and are fed by three major Himalayan rivers: the Kosi, the Narayani, and the Karnali as well as smaller rivers rising below the permanent snowline. This region has a subtropical to tropical climate. The outermost range of foothills called Shiwalik or Churia Range cresting at 700 to 1,000 metres (2,297 to 3,281 ft) marks the limit of the Gangetic Plain, however broad, low valleys called Inner Tarai (Bhitri Tarai Uptyaka) lie north of these foothills in several places.

The Mountain Region (Parbat), situated in the Great Himalayan Range, is the northern part of Nepal. It contains the highest elevations in the world including 8,848 metres (29,029 ft) height Mount Everest (Sagarmatha in Nepali) on the border with China. Seven other of the world's eight thousand metre peaks are in Nepal or on its border with China: Lhotse, Makalu, Cho Oyu, Kanchenjunga, Dhaulagiri, Annapurna and Manaslu. 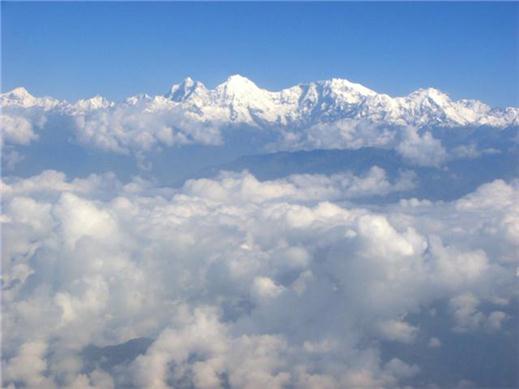 Nepal experiences five seasons: summer, monsoon, autumn, winter and spring. The Himalaya blocks cold winds from Central Asia in the winter and forms the northern limit of the monsoon wind patterns. In a land once thickly forested, deforestation is a major problem in all regions, with resulting erosion and degradation of ecosystems.

Nepal is popular for mountaineering, containing some of the highest and most challenging mountains in the world, including Mount Everest. Technically, the south-east ridge on the Nepali side of the mountain is easier to climb; so, most climbers prefer to trek to Everest through Nepal.

Flora and Fauna
The wide range of climate accounts for correspondingly marked contrasts in flora and fauna between different regions of the country. In the south, the sal (the wood of which is used for railroad ties), sisu, and other subtropical trees are abundant in forests; in the extreme north, junipers are seen even at the altitude of the glacial moraines. Many kinds of conifers also exist in the alpine zone, along with the yew, various hollies, birch, dwarf rhododendrons, and other alpine flora.

Dominant in the Langtang Valley are the chir pine, willow, alder, and evergreen oak. Blue pine and silver fir are frequent in the subalpine zone, which also supports tree rhododendrons - magnificent plants often reaching a growth of 12 m (40 ft). Ground orchids, lilies, yellow and blue poppies and crimson anemones are prevalent in central Nepal. The profusion of wild flowers extends to very high altitudes; at 5,200 m (17,000 ft), several varieties of primula, pink and white cotoneaster, and white erica have been gathered, along with many kinds of alpine mosses and ferns.

The tiger, hyena, and jackal still exist in southern Nepal, although in decreasing numbers. Rhesus monkeys (also seen often in cultural buildings like temples) and a variety of other small jungle mammals and rodents are common. At middle altitudes are found the black bear, several species of cats, squirrel, hare, deer, and antelope. Higher in the mountains, wild sheep and goats, marmots, and a species of tailless mouse-hare are numerous. Small black spiders were found at 6,900 m (22,500 ft) on rocky ledges traversed by the Mt. Everest expedition of 1953. Birds of Nepal include the green finch, dove, woodpecker, nuthatch, warbler, flycatcher, bulbul, and other familiar species. At about 2,700 m (9,000 ft) are found the hill partridge, pheasant, yellow-backed sunbird, minivet, and many of the flowerpeckers; the redstart, pipit, wagtail, snow pigeon, snowcock, and golden eagle thrive in both the alpine and subalpine zones. 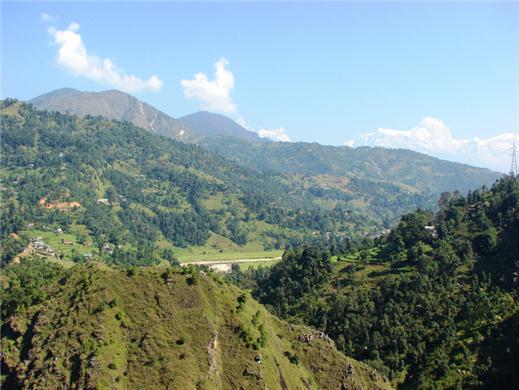 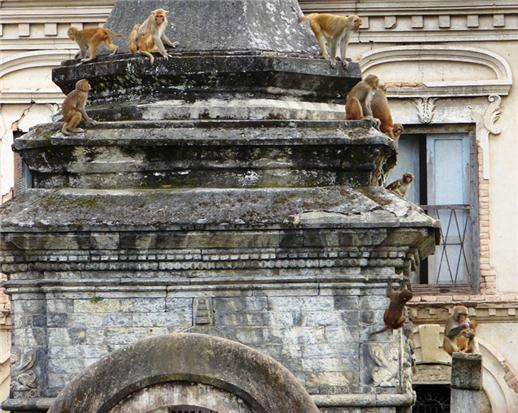